THINGS YOU NEED TO KNOW ABOUT PEX PIPES 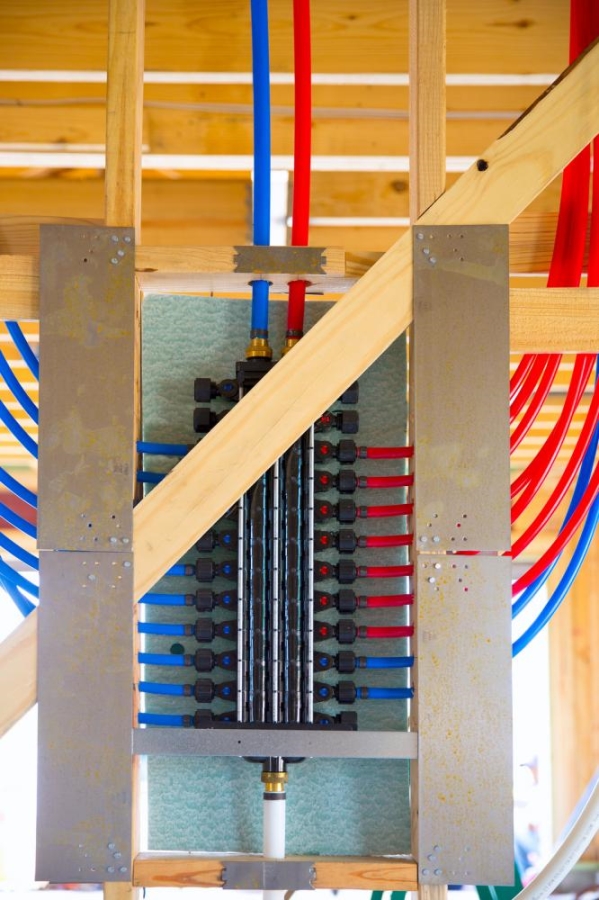 Cross-linked polyethylene (PEX) pipe is a flexible plastic pipe that is gradually replacing galvanized steel and copper pipes in both remodeling and new construction projects. Since PEX piping is flexible, you can replace them on your own in case of a leakage or any other problem. Continue reading if you are interested in knowing more about PEX pipes, as we’ll discuss the details of this flexible piping option.

PEX pipes are available in a wide variety of lengths, ranging from short 1-ft pieces – for small repairs – to huge rolls that are over 50-ft long. The diameter of these pipes can vary between 3/8-inch and 1-inch. Color-coding on the pipe is used to identify what a specific pipe is used for. There are three different types of PEX, but the different colors don’t represent the distinctions. They make it easy for you to identify which lines carry cold water and which carry hot water. For example, the installer uses red PEX pipes for hot water, blue PEX pipes for cold water, and white PEX pipes for either cold or hot water. Gray PEX pipes can also be used for both cold and hot water.

PEX Pipes are Known for their Flexibility

Water systems made using copper pipes or galvanized steel pipes feature main lines and several small branch lines leading to each fixture. A separate connection is required for each branch that connects to the mainline. This is why copper piping and galvanized steel piping systems are considered inflexible. PEX pipes have an advantage over both copper and galvanized steel pipes in terms of flexibility as one end of these pipes connects to PEX manifold (main control system) and then wind through floors and walls to an individual fixture. There are no interruptions or joints. Moreover, since PEX of the same length is used for each cold water and hot fixture in the house, the likelihood of leaks at multiple sites is eliminated.

·No soldering is required for installing PEX pipes
·PEX expands, which is why it is more resistant to cracking due to freezing.
·PEX, unlike copper and steel pipes, doesn’t corrode. Corrosion can lead to leaks as well as contamination of water supply, so it is a big plus.
·Water doesn’t make a lot of noise when flowing through PEX pipes.
·Color-coding makes it easier to distinguish between cold and hot supply lines.
·PEX can also be connected to installed metal supply water lines with correct fittings already.

·PEX isn’t ideal for outdoor usage. The ultraviolet rays of the sun can cause the material to break down rather quickly. PEX pipes that are installed outdoors may crack within the first few months.
·There is no method currently available to recycle PEX since it doesn’t melt like other recyclable plastics. This means that PEX pipes aren’t sustainable.
·Although you can install PEX pipes on your own, you will need specialized tools and connectors to complete the job.

All major building and plumbing codes accept PEX pipes in the United States. However, local codes may have certain restrictions for the installation of these pipes. The standard method for installing these pipes is to join them with unique metal crimp rings and barbed fittings. Once the ring is tightly crimped in place, a “go/no go” tool is used to confirm the diameter of the ring. Push-in fittings can also be used to install PEX.
PEX pipe can generally be used for:
·Portable distribution system and water supply lines
·Heat transfer applications like snow melting and floor cooling
·Water distribution for radiators and other hot water applications
·Fire-sprinkler systems (residential)

Why PEX is Better than Copper?

PEX is better than copper due to the following reasons:
·It is less expensive than copper. If you are doing a large plumbing job, you will be able to save a lot of money by choosing PEX over copper piping.
·PEX fittings are easier and faster to install than their copper counterparts. If you use a home-run system or a manifold, it will be super fast. But, even if you are installing PEX fittings in a branch system, the connections are easier and quicker to make than copper since copper fittings must be soldered.
·Unlike copper, PEX won’t corrode. This makes them an excellent choice for areas where acidic water can damage plumbing pipes.

When shopping for PEX, you’ll see that rolls are labeled with A, B, or C designation. So, what’s the difference between them?
·PEX-A
Peroxide is used to manufacture this type of PEX, and it’s the most flexible of the bunch. It is suitable for use in home water-supply lines. When subjected to freezing water, it can expand to the most significant degree, which means that it is least likely to crack due to freezing. PEX-A is more expensive than both PEX-B and PEX-C.
·PEX-B
The moisture-cure method is used in the manufacturing process of PEX-B tubing. This type of PEX is somewhat stiffer than PEX-A. The coil memory of this PEX makes the tubing of the pipe want to return to its original state. However, this doesn’t pose a hurdle to installation. PEX-B also expands when subjected to freezing water.
·PEX-C
An irradiation method is used to manufacture PEX-C tubing. It the stiffest PEX so it is hard to work with. Stiffness of the PEX-C makes it susceptible to cracking when subjected to freezing water. These undesirable traits are the reason why PEX-C is only suited for short repairs.

PEX pipes can be a better option than both copper and galvanized steel pipes in specific scenarios. However, they have some limitations that you should consider when thinking about using them. If you want to install PEX pipes, consult the professionals at Rowin Plumbing. We can also assist you in the installation of PEX pipes. Call us at 661 252 5757 if you need any help from us.